11 years of journalism in Vienna, Austria 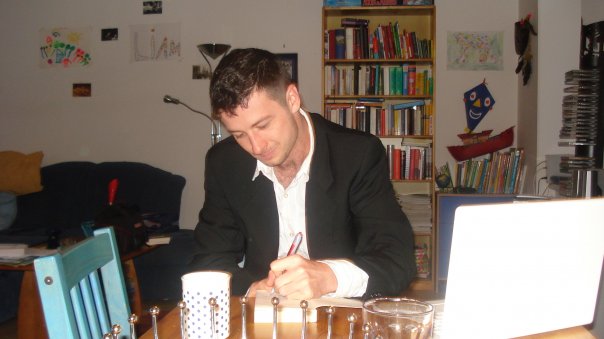 More than eleven years of journalism in Vienna are behind me. Beginning in the year 2000, where I started to work for the internet-company webcontent which filled the website of an Austrian provider with editorial content. During this time I heard of the unconventional but exceptional character Hermes Phettberg at wienweb.at, wrote an letter of application to my former boss and todays friend Thomas Holzinger who was giving me a chance. Weeks later I had my first 60 minutes television interview with former Vice-Chancellor of Austria, Erhard Busek, on a little boat on a sidearm of the Danube river. Thanks God it was not a live interview.

Interviews, numerous articles and reports for wienweb.at, today the tv-channel w24, followed, e.g. a night with the snow shovelers in Vienna or a day in the homeless asylum Josi in Josefstädterstraße. I had the opportunity to make camera-interviews with Austrian comedians, politicians, singers and one outstanding German artist, Christoph Schlingensief, who died too early from cancer in 2010. Besides the work there I begann writing as a volunteer for the monthly quality magazin „DATUM“ (german for „Date“) which was just founded by the Austrian journalist and writer Klaus Stimeder and the best time in my journalistic life started. I worked together with young, hungry people with similar ideas about journalism and the tendency for long nights filled with alcohol and cigarettes and the common interest in quality, literature and music; and a little peace. I learned a lot by listening. My „DATUM“ time was over too soon, since I changed into the publishing-company „News“, still hungry for more journalism. There again I met the most different types of journalists and had reached my goal, arriving in professional Austrian journalism. I was proud of myself and 30 years.

I worked in the political-section of the business magazin „Format“ and during these five years my suspicion, which I felt at the beginning of my professional career grew without being able to name it. Something´s wrong with capitalism. Although studying political science I had never read my Karl Marx and Friedrich Engels. I lacked the theory. But in the business magazin I couldn´t just feel I could also do research on scientific theories and describe them what I felt was wrong. My thinking radicalised. I began to believe that without new indicators for economic growth apart from the ones still in force nothing would change on the global issues we are facing. Neither about the depths of the countries nor about the volatile financial markets, neither at the growing gap between rich and poor nor about the erosion of societies by strange politicians. Or climate change.

I still believe this is true. There is a need for new indicators for growth and as long as they are not established there will not be much change about weapons, drugs, corruption, financial markets, extremism of any kind or climate change. I know that man is not built for universal love. But I think that wealth and the accumulation of money is not the way out of the global turmoil the world is in. But I can be wrong and I am open to correct myself if wrong. Because of course I can see that money leads to a warm bed, nutrition, internet and other pleasures in life. Sport is also a good example for the improvement made by capitalism, although doping…whatever.

Why am I writing this? First, because it is my blog. Secondly, because it has something to do with the first part of my politics-section: „Why politics?“ Guys like those from the small Austrian party „Der Wandel“ (german for „The change“), Noam Chomsky, Gregor Gysi, Bernie Sanders, Jeremy Corbyn might have some of these ideas somewhere in their mind. And everyone is clear that it is a long way to go. This vital system knows ways to test itself, to discover and find new directions. That is why it so unique, isn´t it?